Most Beautiful Libraries in the World

Libraries always seem to have a slightly magical atmosphere. They're quiet and peaceful, as well as being excellent community hubs. But have you ever been to a library that was so beautiful it took your breath away?

Many libraries around the world are works of art, sometimes dating back centuries. If you've got the urge to visit someplace truly awe-inspiring, here are five of the world's most beautiful libraries.

The Admont Library, which is located in Admont Abbey, Austria, is the largest monastery library in the world. Built in the late 18th century by Josef Hueber, this library is luxuriously decorated in the Baroque style. It consists of three large chambers and is 230 feet long and just over 42 feet high, with an upper balcony and seven intricate frescoes. These frescoes, which are painted across the domed ceiling, represent the essence of the Enlightenment. Intended to portray all the phases of human understanding, they begin with thought and speech and ultimately end in divine revelation.

The library is also filled with gold accents and statues, but there is more to it than its stunning decor. It is home to approximately 70,000 books. Perhaps most impressively, the Admont Library contains 530 incunabula — that's 530 books printed before 1500. It also houses 1,400 manuscripts, some of which date back to the 8th century.

The Bodleian Library — known affectionately as "the Bod," to Oxford residents — was the first library for Oxford University, and is still used by students and faculty to this day. This library was built in the 1400s and opened to scholars in 1602. It is one of the oldest libraries in Europe. It is also the second-largest library in Britain.

The age of this building alone makes it worth a visit, but it has also remained stunningly beautiful throughout the centuries. Reminiscent of a cathedral, the Bodleian features high, ornate ceilings, large windows, and elegant archways.

The Bodleian is also home to Shakespeare's First Folio, which it acquired shortly after publication. Without this book, we may have lost 18 of Shakespeare's plays. The folio is still in its original binding but is unfortunately not currently on display.

Trinity College Old Library, located in Dublin, is well known for "the Long Room" where 200,000 of the library's oldest books are kept. This two-story room, with its dark oak paneling, marble sculptures, and 200 foot walkway, is a sight to behold. This part of the library was built in the early 1700s, but its distinctive ceiling — shaped like the inside of a barrel — wasn't added until a century later, when the room needed to expand to fit more books.

The library houses the Proclamation of the Irish Republic and a wooden harp from the 1400s, but it is most famous for the Book of Kells. This manuscript, which is one of the oldest books in the world, is from the 9th century and depicts the first four gospels in Latin. It is beautifully illustrated and has been on display since the 1800s. Trinity College Old Library has an exhibition specifically dedicated to this book, so be sure to take a look at it if you visit this beautiful library. 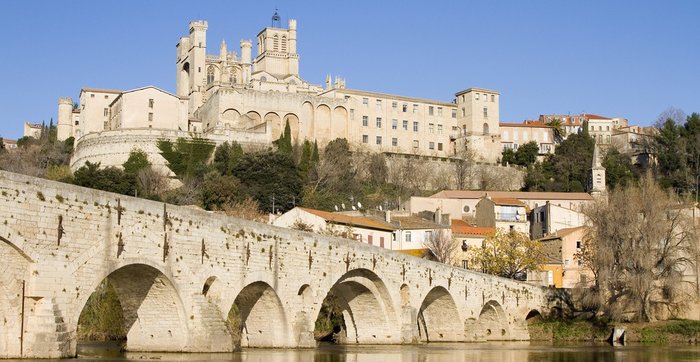 Have you ever thought about getting married in a library? If so, the George Peabody Library has you covered. Located in Baltimore, this stunning, multi-story building hosts numerous private events every year.

Similar to the Trinity College Old Library, the George Peabody Library's main chamber is one long room — but the real beauty of the library comes when you look up. On either side of the main walkway, five levels of cast-iron balconies rise up and encircle the reading room. At the very top of the library, an enormous skylight stretches across the ceiling, letting natural light flood down across all six floors and illuminate the rows upon rows of packed bookshelves. It is easy to see why this building is known as "the Cathedral of Books."

The George Peabody Library opened in 1878 and contains over 300,000 books from as long ago as the Renaissance. It does not offer guided tours, but it is free and open to the public.

If you have a fear of bats, you might not be a fan of the Biblioteca Joanina at Coimbra University — this is one of only two libraries in the world that purposely houses a colony of bats. The purpose of these creatures is to eat bugs that might otherwise harm the books, similar to keeping a farm cat to hunt mice.

But if you have no problem with bats, you don't want to miss this stunning building. Also known as the Baroque Library, this three-story building was built in the early 18th century and is one of the richest libraries in Europe. The main floor is called the Noble Floor, and it was designed to represent the power of Portugal and of King John V. With stunning gold ceilings and sculptures, large archways, and bookshelves rising almost all the way to the ceiling, this room is the picture of decadence. It currently houses 40,000 books.

The Biblioteca Joanina also houses the Academic Prison, the only medieval jail remaining in Portugal. The prison now serves as a depository for manuscripts.

The library does allow public access, but it is limited. If you're ever in Portugal, though, it is well worth your time to visit this opulent building.