of the Oldest Buildings in the U.S.

Compared to other nations around the globe, the United States is a relatively new country. This means it doesn't have the same wealth of antiquated landmarks like those you can tour in Europe. However, the United States still has impressively old structures to visit. Make sure that eight of the country's oldest buildings are on your radar. You might be surprised to see which state has four of them!

On campus at the College of William and Mary in Williamsburg, Virginia, sits the oldest college building in the country. Constructed between 1695 and 1700, the Sir Christopher Wren Building predates even the town of Williamsburg itself. It is the original building of the college, which was named for King William III and Queen Mary II, the English monarchs who granted the school charter in 1693.

First known as simply "the College," the Wren building briefly became the headquarters for the colonial government of Virginia when the capital moved from Jamestown to Williamsburg. Though it suffered a few fires over the centuries, the original walls survived. It continues to be used as an academic building to this day, hosting both lecture halls and faculty offices. Despite the building's long history, however, it didn't receive its current name until 1931. Sir Christopher Wren was a famous British architect believed to be responsible for the building's design.

Head to the College of William and Mary to see this bit of national and academic history for yourself and, while you're there, explore the rest of colonial Williamsburg. The entire town is a living history museum full of cobblestone streets, colonial tradespeople, and historically inspired bites and brews.

As the oldest stone house in New England, the Whitfield House in Guilford, Connecticut is now home to the Henry Whitfield State Museum. The house dates back to 1639, when Reverend Henry Whitfield and other English Puritans founded the town of Guilford as a place of religious freedom. Local granite was used in its construction, which gives the house a rustic look that blends seamlessly into the surrounding Connecticut countryside.

The museum today provides visitors with three floors of antique furnishings and relics from the area's history. It also has rotating exhibits and a research library full of local and genealogical sources. Pore over the archives or wander the landscaped grounds past centuries-old stone walls, a cannon dating back to the War of 1812, and a statue of Henry Whitfield himself.

Guilford lies about 20 minutes west of New Haven, where you can visit another of the nation's oldest colleges and see more of New England's history. Be sure to check out stops like Grove Street Cemetery, the country's first chartered burial ground.

The C. A. Nothnagle Log House was built between 1638 and 1643. It is believed to be the oldest log cabin in the country. The home's construction suggests that it was built by Finnish immigrants since it features tell-tale Scandinavian details like an asymmetrical fireplace and a chimney that sits inside the building for extra warmth.

The New Jersey house was added to the National Register of Historic Places in 1976, and a local couple, Harry and Doris Rink, have been taking care of the property since 1968. They live in an adjacent house and have been caring for the cabin and offering free tours for decades. Harry does all the repairs by hand, using local clay to keep the cabin as true to its original form as possible. Though the Rinks intend to stay on the property and continue giving tours, the house itself was on sale for $2.9 million in 2018 — a price that includes the home's historical furnishings and artifacts. 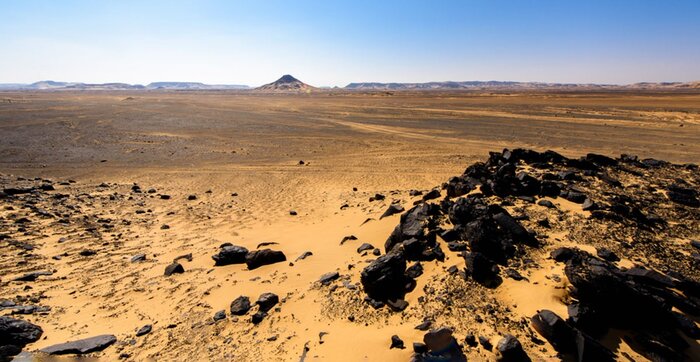 Where is the Black Desert?

Built partly in 1637, the Fairbanks House is the oldest known wooden structure still standing in North America. The house was built for Jonathan and Grace Fairbanks out of oak and cedar by a master carpenter and master mason, and this high-quality construction has been largely responsible for the house's longevity.

It subsequently housed eight generations of the Fairbanks family and was lived in continuously for 268 years. Family members made improvements over time, with additions nearly doubling the size of the original house. Wallpaper, paint, and larger windows were also added. While the house was improved over time, it was never updated to include heat, running water, or electricity.

The last family member moved out of the house in 1904. The family established the Fairbanks Family in America, Inc. organization in order to purchase the house and make it available for tours by future generations. The house has been a museum for over 100 years.

San Miguel Chapel in New Mexico is the oldest church in the continental United States. The earliest documentation of the church's existence dates back to 1628, and oral history indicates it might have been built as early as 1610.

The original church building was built on the site of an ancient kiva of the Analco Indians. A kiva is an ancient southwestern architectural form meant to be used as a community gathering place. The church was most likely built by Tlaxcalan Indians, a group that came to New Mexico in 1598. The church was used by the community living on the south side of the Santa Fe River, which included Tlaxcalan Indians, laborers, and Spanish soldiers.

While the church suffered serious damage in 1640, and was damaged again in 1680 during the Pueblo Revolt, the structure  was repaired after each incident, with ornate additions made over the years — including an altar screen in 1798 (one of the oldest in New Mexico), a three-tiered tower in the mid-19th century, and a 780-pound bell in the bell tower in 1856. After a storm brought down the bell tower in 1872, the San Jose Bell is now displayed inside the chapel. Mass is still hosted at the church, and it is otherwise open to visitors.

Palace of the Governors in Santa Fe, New Mexico

If you visit Santa Fe's downtown plaza, you won't be able to miss the Palace of the Governors. The building takes up the entire north side of the plaza and is the oldest continuously occupied building in the United States. Built in 1610, the building was originally used as the residence for the first Spanish royal governor of New Mexico. It continued to house Spanish, Mexican, and American governors until 1909, with the residents rotating as the territory that is now New Mexico continued to change hands among the three countries. In 1909, the legislature voted to hand control of the building to the School of American Archaeology and the Museum of New Mexico; these entities still have control of the building today.

A one-story building in the Spanish-Pueblo revival style, the site’s improvements and additions over time incorporated styles from many different eras including Spanish-colonial style. The adobe façade provides a shaded area that serves as a marketplace for Native American vendors, while the museum includes rotating exhibits, about o the building and New Mexican history.

Acoma Pueblo is thought to be one of the oldest continuously inhabited sites in the United States. Also called Sky City, the building is set high atop a 367-foot sandstone mesa and is inhabited by the Acoma people. The pueblo is located approximately 60 miles west of the city of Albuquerque. Built in the 12th century, it is thought that this location was chosen for its ideal defensive position from raiders.

Today, the pueblo consists of approximately 300 two and three-story adobe buildings with  upper levels accessible by exterior ladders. Historically, the building was only accessible via a hand-cut staircase in the sandstone. In the 1950s, a road was added into the rock face. The Acoma Pueblo has no electricity, running water, or sewage disposal.

Currently, fewer than 50 tribal members live on the pueblo, though nearly 3,000 live nearby in the villages of Acomita, McCartys, and Anzac. The tribal members are known for their creation of beautiful, thin-walled pottery, and tourists flock to the pueblo on the weekends.

Taking the honor as the oldest, continuously lived-in housing in the United States is the Taos Pueblo in New Mexico. The oral history of the pueblo and its people is still unknown, but ancient ruins indicate that the pueblo has existed for almost 1,000 years, and the main structures were most likely constructed between 1000 and 1450. The pueblo is the only living Native American community that is designated both as a UNESCO World Heritage Site and a National Historic Landmark.

Taos Pueblo is made entirely of adobe with walls that are several feet thick. The exteriors of the buildings are maintained through regular re-plastering with thin layers of mud, while interior walls are coated with thin layers of white earth to keep them clean and bright.

The Taos people have fought for centuries to retain their land and culture. Finally, in 1970, the U.S. government returned 48,000 acres of mountain land to the Taos people, including the sacred Blue Lake used for ceremonial rituals. While the Taos Pueblo is open for visitors, Blue Lake and the surrounding mountains are only accessible to members of the Taos Pueblo.