When you think fall foliage, you might picture Lake Champlain in Vermont or the Berkshires in Massachusetts. But you don’t need to visit New England to experience autumn vistas glowing red, amber, and purple. There are underrated opportunities to view the seasonal spectacle all over the country. Here are five options that might offer a quick getaway in your own backyard.

Just a short drive northwest from Manhattan lies the Delaware Water Gap, a 40-mile stretch of the Delaware River that cuts through the Appalachian Mountains. The area is cloaked with northern deciduous forest rich with oak, hickory, maple, cherry, walnut, sycamore, and birch trees — a feast for the eyes come September and October as lush, green woodland turns copper, gold, and burgundy.

Spanning 70,000 acres and popular for hiking, rock climbing, canoeing, and fishing, the area was once the site of a flood mitigation project. In the 1950s, a dam was proposed by the U.S. Army Corps of Engineers. The project would have resulted in a 37-mile-long lake that supplied power and drinking water to New York City and Philadelphia. Approximately 15,000 residents were displaced before opposition from environmental groups and a lack of funding nixed the plan. The project was abandoned in 1978 and the Delaware Water Gap National Recreation Area was established.

The Appalachian Trail, a national trail that runs from Georgia to Maine, travels through the recreation area on the New Jersey side. Follow it north to High Point State Park. The 15,000-acre park includes High Point, the highest peak in New Jersey, where you can view over 80 miles of spectacular fall color on a clear day.

Drive an hour and a half southwest of St. Louis, and you'll happen upon Mark Twain National Forest. Named for the famous Huckleberry Finn writer and Missouri native, it’s the state's only national forest and spans nearly 1.5 million acres. President Franklin D. Roosevelt signed the park into existence in 1939 in an effort to restore and preserve vast swaths of Missouri that had been ravaged by extensive logging.

Start with the Glade Top Trail, Missouri’s only scenic byway. The trail is 23 miles in length and meanders along mountain ridges, offering stunning panoramas. You’ll see the usual white-tailed deer, wild turkeys, and a variety of songbirds, but unique area microclimates might also bring you face to face with roadrunners, pygmy rattlesnakes, and stinging scorpions. Visit on the third Saturday in October, when the Ava Chamber of Commerce holds its annual Flaming Fall Revue, which celebrates the brilliant array of colors with local barbecue and live music.

About an hour and a half southeast of Portland is Willamette National Forest, a 1.6-million-acre wilderness region along the Cascade Range in Oregon. Containing seven major mountain peaks, the area offers fishing, hiking, camping, and invigorating hot springs. Though the dominant tree species in Willamette is the Douglas fir, an evergreen, the forest floor and understory is thick with various vines, shrubs, berry bushes, and deciduous trees that glow red and yellow in late October.

With over 1,000 miles of rivers and 375 lakes, the forest contains rare tracts of old growth forest, including 300-foot evergreens with trunks up to eight feet in diameter. As valuable timber, these trees regularly lead to heated arguments between logging companies and environmentalists seeking to preserve the historic trees as well as endangered wildlife including northern spotted owls, bald eagles, cougars, black bears, and various fish species.

Established in 1933, the Willamette National Forest is part of what was once known as the Cascade Forest Preserve, which was created in 1893 by President Grover Cleveland as a direct result of local citizens campaigning for the protection of the Cascade Range. Today, the region is not only a paradise for wilderness-lovers, but an important region for renowned wineries and farm-to-table cuisine. 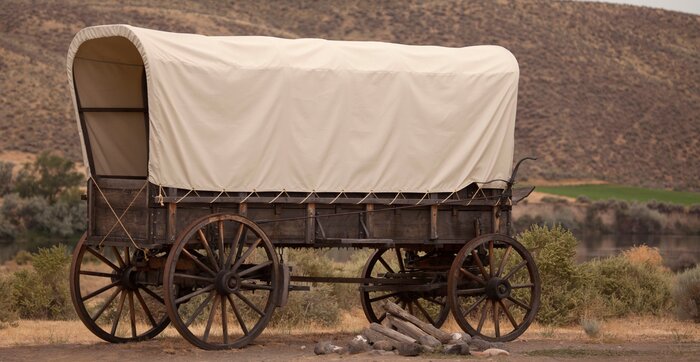 What is NOT one of the six states the Oregon Trail passed through?

The region is generally mountainous and some parts are quite arid, so many areas aren’t dense with forest. And yet, the beeches, aspens, and maples that do thrive in this often hot and dry climate absolutely light up craggy mountain sides with amber, scarlet, and purple. The display begins toward the end of September and lasts for only a week or two in early October, just as the famous Fall Arts Festival is wrapping up in town.

Your best bet for spotting the autumn spectacle is driving the Enchanted Circle Scenic Byway, an 85-mile loop journey that begins and ends in Taos and passes through Eagles Nest, Questa, and the Red River Valley. It also encircles Wheeler Peak, the highest point in New Mexico and part of the Sangre de Cristo Mountains. Established as a National Forest Scenic Byway in 1989 and a New Mexico Scenic Byway in 1998, the breathtaking road trip is rich with Native American and Wild West history.

Within driving distance of Knoxville, Tennessee; Asheville, North Carolina; and Lexington, Kentucky, Cumberland Gap National Historical Park lies on the border of Kentucky, Tennessee, and Virginia. Covering 24,000 acres, the Cumberland Gap is a natural break within the Appalachian Mountains. With 97% forest coverage, the area offers a variety of mulberry, hazelnut, maple, willow, and beech trees, so fall displays range from golds and ochres to the deepest maroons and plums.

The park was established in 1940 by President Franklin D. Roosevelt to commemorate the area as an early route and gateway toward western expansion. It has continued to grow over the years, with thousands of acres surrounding Fern Lake and the town of Middlesboro added as recently as 2009.

Start your fall foliage journey in Middlesboro, a quaint town located within one of the largest meteor craters in the world. The area is surrounded by mountain ridges, making it convenient for hiking, biking, and camping — all with stunning views of the vivid fall colors starting in late September. The town even throws an annual fall festival featuring local food, live music, and elk-watching tours coinciding with peak foliage.